This vegan potato leek soup is dripping with delicious and simple comfort. Easy and quick to prepare. What’s not to love?

Where does potato leek soup come from?

There is some debate on the origin of this soup. I have seen claims of it originating in Wales. I’ve also seen it called a ‘French Classic.’ In France, they also eat a cold version, called vichyssoise which is said to have originated in America! Ireland and Scotland both have their versions of potato leek soup as well. Wherever it originates from, it is delicious!

Due to the addition of cream or milk, potato leek soup is not traditionally vegan. Usually, the cream is added at the end, and you could easily swap it out for cashew cream or something similar. In our version, we use coconut milk as part of the cooking liquid, which gives the soup a creamy consistency. Don’t worry, it doesn’t taste like coconut!

A word on leeks:

Leeks are related to onions and have a sweet and mild onion flavor. They look like a giant green onion!

When shopping for leeks look for a firm white stalk and vibrant green top. Don’t pick leeks that are limp or soft.

How to wash leeks

You can wash leeks before you cut them. You just want to make sure that you wash well between the layers. You can also wash them after you cut them. Just put the cut leeks in a bowl full of water and swirl them around until they are clean. Then drain the water. I find this way to be more effective.

You can eat the whole leek, but in this recipe, we are going to use the white stalk up until the greens start to get more tough. Roughly the bottom half of the leek.

How to cut leeks

To prepare them, trim the bottom part of the bulb off and the tough part of the greens. (image 2) You can save the greens for stir fry or stock. Then cut the leeks in half lengthwise (image 3). Finally, slice the leeks in thin half-moon slices. (images 4 and 5) Now your leeks are ready for your soup!

How to make potato leek soup

Can you freeze potato leek soup?

You can freeze it! To give it the best texture when reheating it, make sure that it is completely blended before putting it in the freezer. Add it to an airtight container and it should last up to three months.

How long is it good for?

It will last three months in the freezer and about 3-4 days in the fridge.

What to serve with it

I love to eat this soup with some crusty bread and a side salad. It would also be good with a hearty sandwich. Yum!

You can garnish the soup with vegan sour cream, and herbs. Some croutons would be delicious as well!

For other great soup, ideas check out this vegan chili or this tortilla soup! 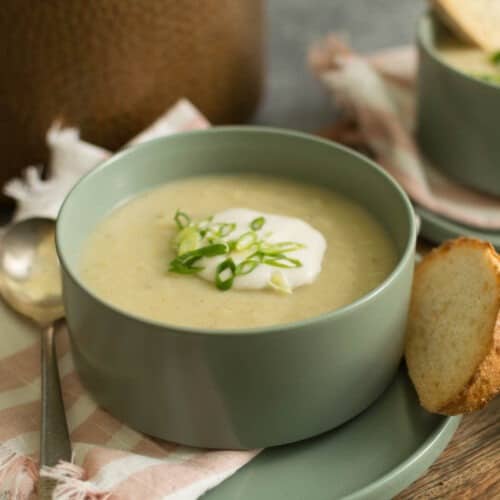 Please leave a comment below and let me know how this recipe turned out for you!

SEARCH FOR A RECIPE!