Have you ever wondered how to deseed a pomegranate without dedicating a day and a half to extracting each one? Those little crunchy, juicy, flavorful nuggets of joy sent straight from heaven?

The task is nowhere near as daunting as you might think. I promise, you’re only a few minutes away from those delectable morsels.

When deseeding a pomegranate there are really only two things that you need to decide: (1) How to open or cut the pomegranate and (2) How to extract the seeds.

My favorite methods for deseeding pomegranates are either cutting in half or making the flower and then whacking the pomegranate. It is fast and easy and I’m not looking for commitment.

There are a couple different ways to cut a pomegranate. Try out a few of them and see which one you like the best. Kind of like cracking an egg with one hand or two (or deciding either of those ways are just too complicated...), you’ll quickly develop a preferred method for accessing the treasures inside this wonderful fruit.

One trick that you can use before any of these methods is to roll the pomegranate around on a hard surface with a little pressure to loosen up the seeds a bit. Sometimes this can make the deseeding process go a little smoother.

Cutting Method #1: Cut in Half

The first way to cut a pomegranate is to cut it right in half. You still with me? Pretty simple right?

Many people advise against doing it this way because you end up cutting into a couple of the seeds and losing some juice. However, if you are cutting for yourself and not doing anything fancy with it just go for it. It is faster than the other methods. But if your pomegranate is on the small end than one of the other methods might be easier. 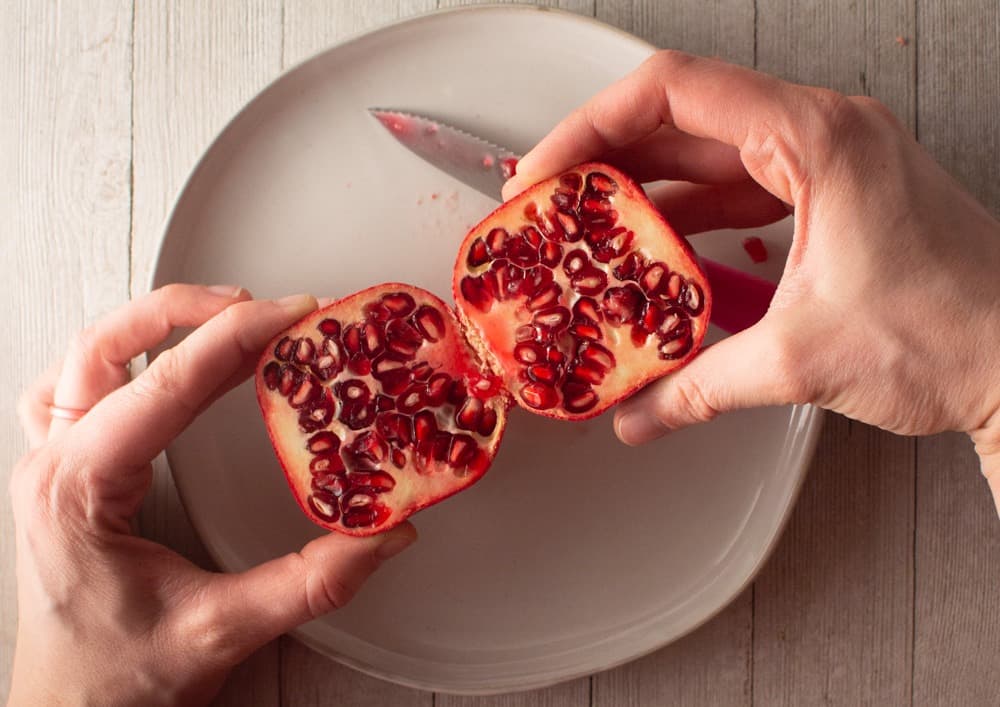 I use this method even when I am doing something fancy because the juice loss is minimal and I never even notice the two or three seeds that might have been harmed.

The second way to cut a pomegranate takes a little longer, but not much longer, and I think it’s pretty fun anyway.

The first thing you need to do is find the calyx, or what I call the crown, of the pomegranate. Hint: It looks like a crown. Or a nob. Or an outie belly button on a pregnant lady.

Look down the fruit and locate where the slope starts to drop down the sides of the fruit. Cut a slit around the top of the pomegranate. Make sure you don’t cut too deep so you can avoid cutting the seeds.

Next, gently pry the top off and and enjoy your first peek of those beautiful red seeds (or arils if you want to get technical.)

Now you are going to make three to four slits on the sides following the lines of the pith. Cut until you are about an inch or so from the bottom of the fruit.

At this point, you should splay the pomegranate open like a flower and move on to the extraction process.

This method is similar to the last one only we are going to cut all the way through and separate the chunks of fruit.

Cut the crown off the pomegranate, then turn it over and cut the bottom off the same way.

Now cut down the sides of the fruit along the pith five or six times and pull the sections apart.

This is my favorite method because it is fast and easy. Some people don’t like this method because it can be messy. I have also heard claims that it damages the seeds. But I have never had a problem with less than stellar seeds and I have whacked many a pomegranate.

As for the mess, you do want to be careful because pomegranate juice can stain. But I have dodged all juice missiles by using a big deep bowl. Super easy. Most people I have seen struggle with this method have tried to knock the seeds out onto a plate or shallow bowl. Bad idea.

If you are still worried about the mess you can easily cover the pomegranate and bowl with an old (not favorite) kitchen towel before you start whacking. Just be careful not to smack your hand in the process.

You’ll want to use either of the first two cutting methods before you start whacking. It is hard to whack seeds out of a small section of pomegranate so steer clear of the third method.

Grab your pomegranate in your less dominant hand with the seed side down.

Now, using the back of a wooden spoon, gently (unless you need to let out some frustration) whack the back of the pomegranate until all or most of the seeds fall out.

I don’t love this method.

But I have to throw it in here so you really know your options. And if it ends up being your favorite, you’re welcome.

This method is for the patient as you are peeling the seeds out of the fruit with your fingers. It sounds simple and it's really not complicated. But I 100% do not enjoy doing it this way. It takes a long time and can also get messy. Like really messy.

I have to admit that I know people (ok maybe one person) who grew up using this method and thinks that I am complicating the process. If you resonate with them then keep on keeping on.

This method is supposed to be gentler on the seeds than whacking and some say that the water helps the seeds detach from their skin easier.

You can use cutting methods 2 or 3.

The advantage of water is that the pith (the off white membrane that surrounds the seeds) that comes out with the seeds will float in the water while the seeds sink. You can easily scoop the pith out with a small mesh strainer or your hands if you want to get fancy.

Side note: You can use water to separate pith with the other two methods as well. Just pour water over your already extracted seeds and the pith will float to the top.

If you want to save any of the juice that might have come out while deseeding than you will want to strain it off before you pour water on the seeds. Or you can just pick the pith out with your fingers.

Try them in this delicious grapefruit pomegranate kale salad!

What is your favorite method for deseeding a pomegranate? Do you have another method that I haven’t mentioned here? Let me know in the comments!

SEARCH FOR A RECIPE!